The Requiem Network is a sci-fi, time travelling, 2D platformer RPG (try saying that after a few drinks) set across 11 different time zones.

Returning from a mission recovering an alien artefact from the centre of the galaxy, Bishop’s ship is attacked upon its return to Earth by an unknown species with severely advanced technology. With the ship on a collision course with Earth Bishop attempts to defend the artefact from the alien invaders, unwittingly activating it and throwing himself to the edge of the galaxy and several thousand years back in time to the year 689BC.

Stranded in the past, Bishop must fight his way back through the Requiem Network, a system of ancient machines that allow time travel through sequential gates, to make it back to the year 3032 and save the world. If he is to stand any hope of defeating the advanced species he’ll need to gather the technologies of the ancient civilisations he visits whilst traversing the network. 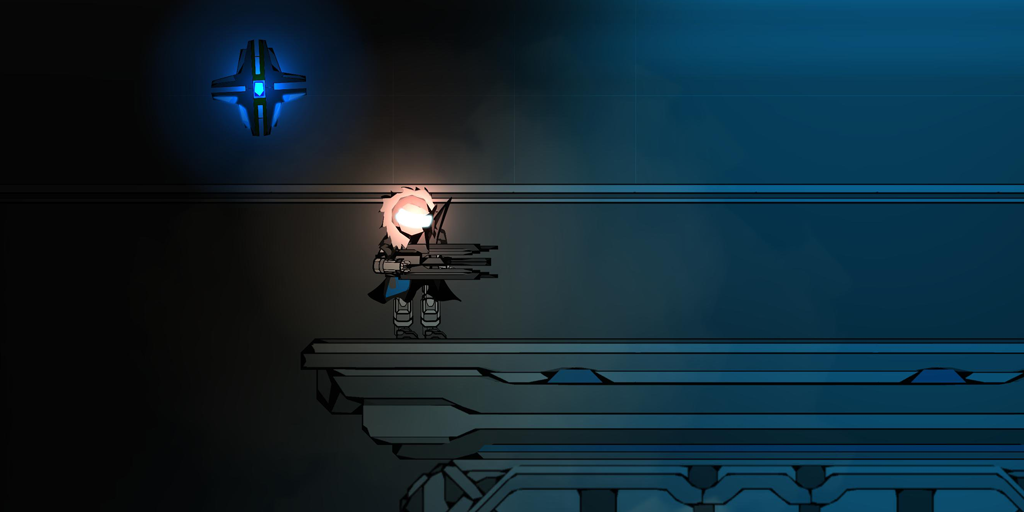 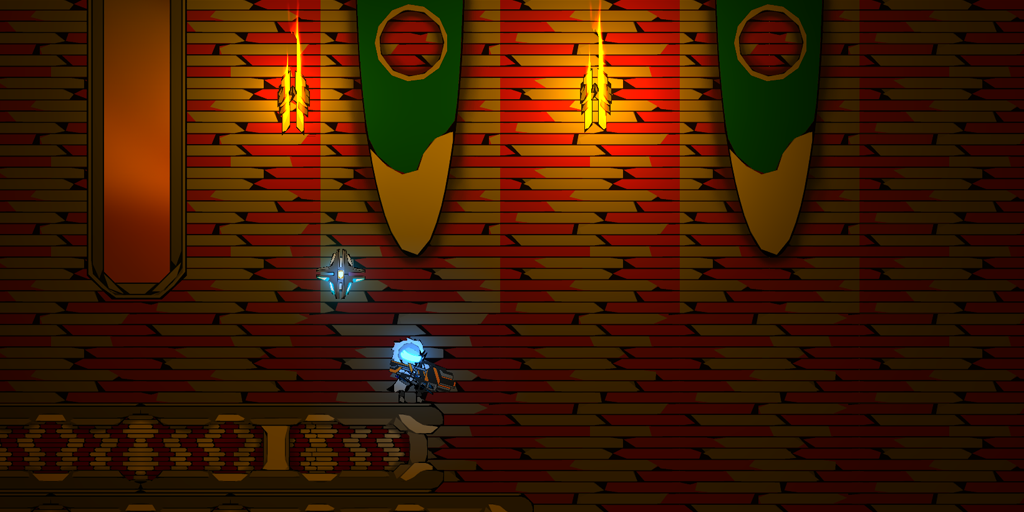 As with all AG games we have an epic storyline prepared for the Requiem Network. Strap yourself in for an epic non-linear storyline full of twists, turns and copious amounts of headache inducing time travelling paradoxes.

Experience the story through the characters you meet along the way, including Bishop’s AI companion, Axis, who journeys through the Requiem Network by his side.

Explore the backstories of the ruined civilisations littered throughout the Requiem Network, and uncover what brought them to their knees.

We’re not even sure exactly what genre The Requiem Network is, so we refer to it as an sci-fi RPG dungeon crawler with a time travelling element. Sci-RPG-crawler? Sure, let’s go with that.

Battle through procedurally generated enemies, armour and weaponry, ensuring that no two playthroughs are the same, whilst levelling up to reach your full potential.

Whilst there are 10 zones in The Requiem Network, the game operates as one gigantic puzzle.

Sometimes in order to progress through the game in the past you’ll first need to visit the future in order to obtain the equipment you need to overcome obstacles. Formidable enemy in the past? No worries, nip to the future, level up and grab a few futuristic weapons to give you an unfair advantage, and show that enemy why you’re the one who’s entrusted with the power to defy physics.

A game big on its light effects, The Requiem Network utilises dynamic 2D lighting together with its 2D high definition assets to create a blend between the retro graphics with light effects to create some kind of retro hybrid.

Throughout The Requiem Network you will encounter a vast amount of weaponry and armour as you flit through the ruins of hyper advanced civilisations. Harness their weaponry and combine it with the technology of the past to create your own formidable armoury assembled across time and space.

Customise Bishop with the armour you obtain throughout the game. Lock in the strongest assortment of armour to increase Bishop’s susceptibility to hits. Our pick whatever makes you feel formidable, that works as well.

We want every play through to be unique, so the power of weapons and armour will always be random (but linked to the level of the player).

The Requiem Network aims to deliver an AAA studio sci-fi storyline to the indie-game scene. Alongside the games’ RPG features players explore 9 levels, based on the former home worlds of fallen hyper-advanced civilisations, all falling to their knees in the face of a common enemy, Nemos and his Dark Empire.

Delivered through Bishop and his AI companion AX-15 (‘Axis’), the story is full of the twists, turns and paradoxes you would expect from a time travelling sci-fi. Discover the true evil of the Dark Empire, and mount a defence against their attack on Earth, lest it suffer the same fate as the worlds within the Requiem Network.

This is just the start. We operate a ‘one universe’ ethos at Aura Games, meaning all of our games take place in the same canonical universe, and The Requiem Network is the beginning of one epic story. Events from your actions in The Requiem Network will bleed into our future games in seemingly unconnected ways. 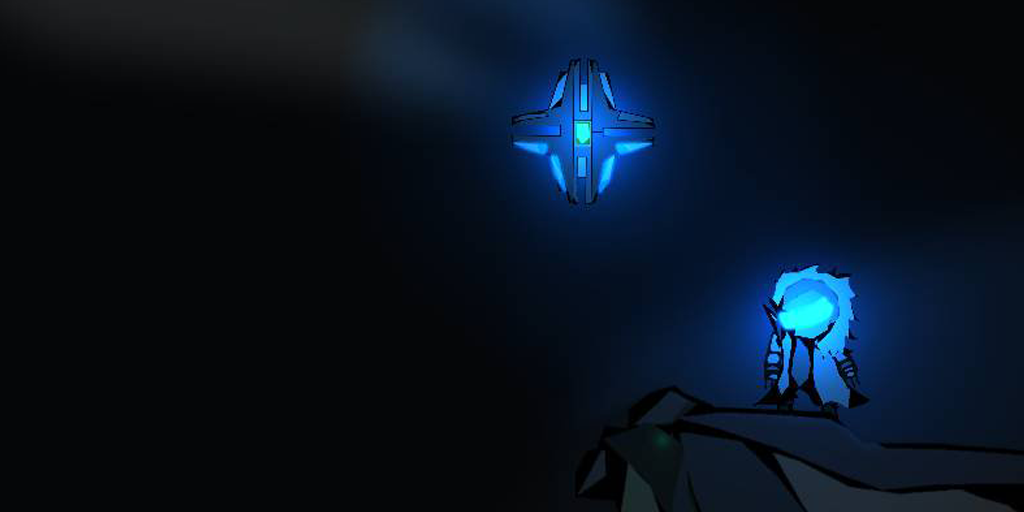 Customise Bishop with the weaponry and armour of fallen civilisations. 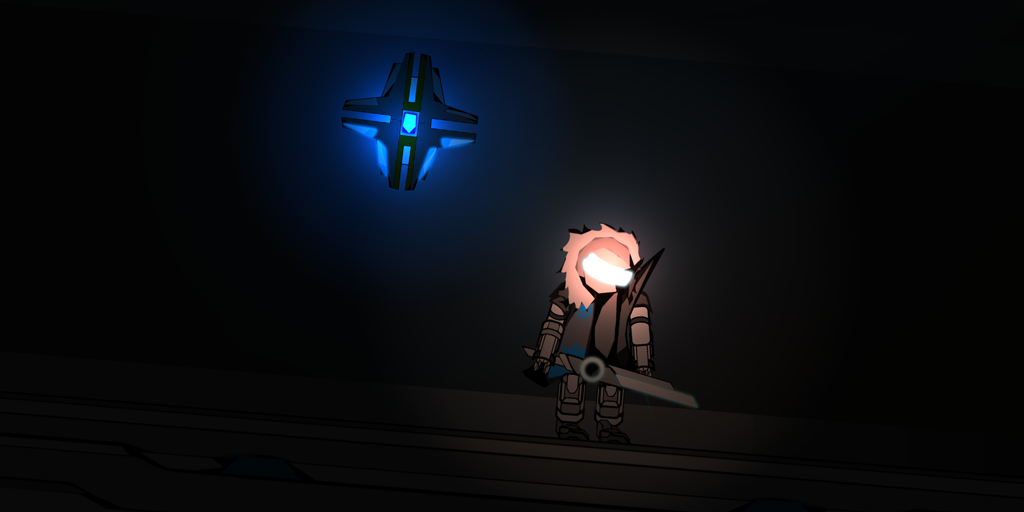 Four Levels of Difficulty to Experience

Enemies are weaker than normal, your guns and armour are much more likely to spawn more powerful. A mode for when you just don’t want to fight, want to be told a story and sit back and watch the world go by.

The default way to play the game. Everything is pretty balanced; armour and weapons will drop in line with the player’s level, and enemies will present a good challenge.

Enemies are given an unfair advantage through a multiplier in their stats. Weapons and armour are likely to spawn weak, ammo is scarce forcing you to rely on melee attacks and the slightest mistake is punished by a quick and unrelenting death. Good luck.

Assemble a squad and take on the Requiem Network together as a team, with only one copy of the game and no online subscriptions in sight. Simply pick up a second controller, whack the start button and boom, another player is joined.

But it’s not quite that simple. Adding another player ads a multiplier to enemy stats, so whilst you have double the firepower, they can take more damage. We’re kind of afraid of playing the game with 4 players on unrelenting.

Prefer going head to head? Head on over to the arena and challenge your friends to up to four player battle. Storm fortresses occupied by one another based on the levels featured in the requiem network.

Any pre-orders of The Requiem Network will come bundled with a copy of the soundtrack, and you can check out the album's progress at our Soundcloud.

Each expansion will add 5 new levels, enemy sets and bosses and will continue the storyline of the first game.

Are we planning DLC because we’re evil game developers trying to bleed every penny out of our players? Partly. But also because we’re a small indie development team, the game was always intended to have 20 levels, but we don’t want to delay the release.

We hope to add in quests in the expansions, which will add side missions to the levels in the base game, and also vehicle sections of the game where you take control of various machinery and do battle.

The Requiem Network takes the features from the games of the past you loved and brings them screaming into the 21st Century. Enjoy 4 payer local co-op from one copy of the game, without the need for an internet connection, online subscription or the sacrifice of your first born child. Work together to defeat the campaign or go head to head in our arena mode and battle it out for bragging rights.

Unlock more playable characters for multi-player by playing through the campaign, finding in-game collectables and completing the achievements. Locate hidden rooms and all the Easter eggs you can handle. Just like the good old days. Play the game on any one of four different difficulty modes and go for the old-school ultimate glory of 100% completion. 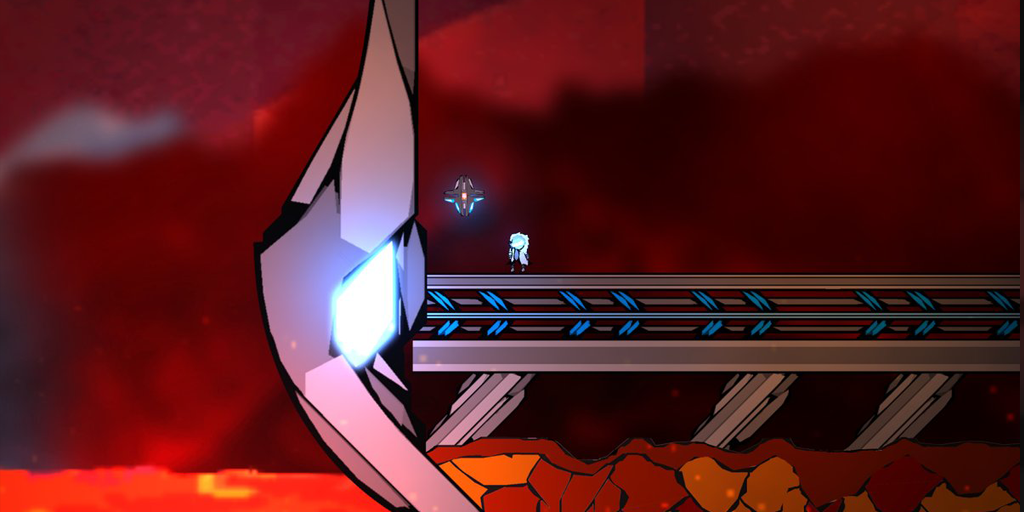